Back to Blog Posts
Prev Next

The 10 Most Common Questions Asked About McKinney [With Answers] 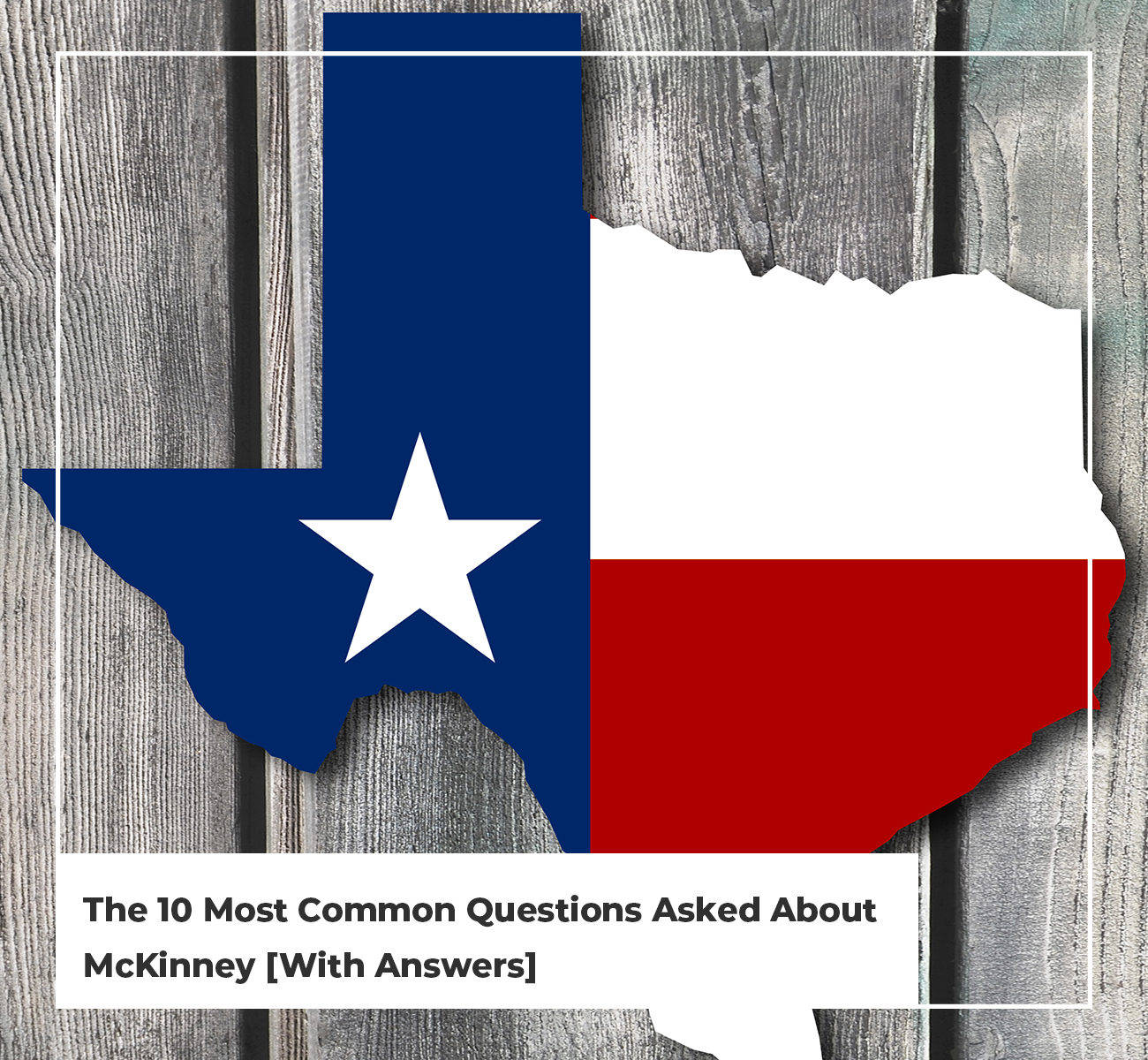 A suburb of the Dallas-Fort Worth Metroplex, McKinney, Texas is one of the fastest-growing cities in the state. With a population of over 182,000 and counting, McKinney is a thriving community with plenty to offer its residents. But even with all that this city has to offer, there are still some things that newcomers and long-time residents alike may not know about McKinney.

Here are 10 of the most common questions asked about McKinney, answered.

What County is McKinney in?

A small part of the city of Dallas as well as the Dallas-Fort Worth-Arlington metropolitan statistical area is located within Collin County. As of 2020, there was an approximate population of 1,064,000 making it the sixth-most populated county in Texas and the 43rd largest county by population in the entire country.

Where is McKinney, Texas?

As mentioned above, McKinney is located in Collin County, Texas. It falls within the northeastern portion of the state of Texas, located just west of Interstate 75. State Highway 5 runs by the city, just a few miles to the west and Interstate 35 is approximately 25 minutes away. 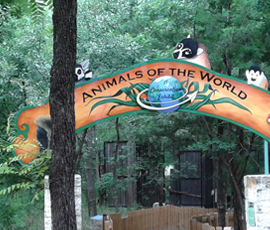 15 Best Things To Do In McKinney TX

How Far is McKinney, Texas from Dallas, Texas?

McKinney, Texas is 31 miles north of downtown Dallas, Texas. By car, it is slightly farther, 32.1 miles. If there is no traffic, the trip should take roughly 35 minutes, however, during regular rush hours, travel time could nearly double, being closer to 53 minutes.

What is the Population of McKinney?

McKinney, Texas is a city that's growing fast. It has one of the highest populations in America and it continues to increase by 3% annually! In just 15 years since 2000-2016, McKinney's population increased 63%. However, with all this growth comes challenges such as traffic congestion which can make driving around town difficult at times for residents who live outside denser areas near major highways or freeways.

What Is There To Do in McKinney, Texas?

McKinney is a vibrant city full of art, culture, recreation and activities. Rated as one of the most livable cities in the country, McKinney offers an abundance of things to see and do. Here are some of the top attractions found in McKinney, Texas:

McKinney, Texas is a city of small-town charm. The friendly people and historic buildings make it easy to get lost in this quaint town steeped with history from its old western frontier roots as well as more modern times where Main Street plays host every day of the year for everything from dinnertime dining on handcrafted dishes served by attentive servers in cozy cafes or celebrating Oktoberfest during fall festival season. Many of downtown McKinney's buildings are historic, some dating back as far as 165 years!

Step back in time and explore ten buildings that date between 1854 and 1930. Here you’ll find a chapel, schoolhouse, boarding house as well other homes dating from the 19th century! Dressed-up volunteers are ready to show off their historic skills needed for life on display in McKinney's earliest days at this historical site just south of downtown McKinney.

A couple of blocks away from where Main Street turns into First Avenue North lies Chestnut Square - an impressive group museum complex preserving how communities thrived during these early years after Texas' independence granting it statehood when we became The United States Of America In 1845.

The Children's Museum of Houston is a place where children can explore the natural world through exhibits and collections. Inside, there are wildlife skins from around Texas as well as minerals or shells found at sea; outside they will find gardens with native plants that were collected by botanists on hikes in order to preserve fragile ecosystems for future generations who may want to experience this land like it was back when we lived here before us! Walking trails lead visitors past butterfly enclosures, plant exhibits and beautifully designed bird gardens.

What better way to spend your Saturday afternoon than at this park? This 108-acre neighborhood offers the perfect spot for relaxation with its beautiful views, ample picnic shelters and hiking trails. You can enjoy fishing on one of two piers or simply sit back in their sunshine while you read a book! There are also courts where people play volleyball all year long as well as an opportunity if activities like horseshoe pitching interest you too.

Collin County is named after one of the most influential Texans in American history, Collin McKinney. He helped instigate an armed revolution and ultimately lead Texas to independence from Mexico! The year 2016 marks his 250th anniversary so there are many exhibits on display that shed light on this man's life story including documents signed by him as well as a collection of photographs taken during later stages.

McKinney’s public course is a perfect place for a round with friends. You'll get more than your money's worth here, as the 18-hole, forest-lined par 70 will provide you ample opportunity to play both putting greens and driving ranges alongside short game areas complemented by the pro shop for post-round drinks or meals after each successful outing on this forgiving layout that isn't too difficult.

Lewisville Lake is a refreshing oasis on the western fringes of McKinney. The lake's beautiful shoreline and freshwater fish provide endless opportunities for outdoor enthusiasts, as well as those looking to take it easy on the beach.

It's a great spot to go hiking and biking! You'll find nice picnic pavilions, playgrounds for children of all ages as well as plenty of open space with fantastic views. For those who like mountain bikes or just want some time outside, Erwin Park has two repair stations where you can get air in your tires when they need it most. 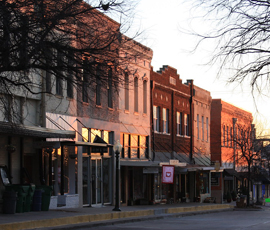 Living In McKinney, TX: What It's Really Like [2021 Edition]

Who is the Mayor of McKinney?

The current mayor of McKinney, Texas is George Fuller. The McKinney City Council is made up of seven members. Four are elected to single-member districts, two people and the mayor will serve without any district boundaries tying them into specific areas so they can focus on larger issues within their jurisdiction. Each member serves a four year term.

What is the Zip Code for McKinney?

McKinney is a geographically diverse city with six areas that can be matched to their corresponding zips. Most of downtown McKinney falls under 75069, while 75354 also encompasses parts of neighboring Frisco and Square airports fall into the 75454 zip code for southern sections of this Texas metropolis. Other regions include northern neighborhoods like 75071 which make up most areas in McKinney’s north end.

What Major Cities are Near McKinney, Texas?

How Big is McKinney?

Where Should I Eat in McKinney?

There are plenty of great places to eat in McKinney. From casual southern BBQ to fine dining, you'll be able to find something to your taste. Some of our favorites include:

Harvest is a farm-to-table restaurant that features southern cooking with a twist. They offer local and seasonal menus to ensure that meals are crafted with the highest quality and freshest ingredients possible.

Hailed as one of the city's best restaurants, Sugarbacon offers a one-of-a-kind dining experience. Known for their signature appetizer, Sugarbacon, the restaurant also offers an impressive menu with a wide variety of entrees to choose from.

The Yard is the perfect place to bring your whole family. With indoor dining, patio seating and plenty of space for kids (and adults) alike; come enjoy classic backyard grub while sipping from one frozen margarita or many different beers.

McKinney is a beautiful and friendly city that is ideally located in the great state of Texas. With plenty of things to do and a welcoming atmosphere, McKinney is a great place to call home.

Check out our other blog post on stonebridge ranch homes for sale!

The Good Home Team represents the region's finest properties with exceptional skill using the most innovative technologies currently available. The Good Home Team offers ultimate privacy and security, speed, and efficiency. Their years of full-time experience have given them a clear understanding of the mindset of home buyers and sellers and a thorough understanding of the regional marketplace.

Thinking about relocating to McKinney Texas? Let’s get in touch!

Homes For Sale in McKinney, Texas

Information is deemed reliable, but is not guaranteed accurate by the MLS or NTREIS. The information being provided is for the consumer's personal, non-commercial use, and may not be reproduced, redistributed or used for any purpose other than to identify prospective properties consumers may be interested in purchasing. Real estate listings held by brokerage firms other than The Good Home Team - eXp Realty are marked with the NTREIS IDX logo and information about them includes the name of the listing brokerage. 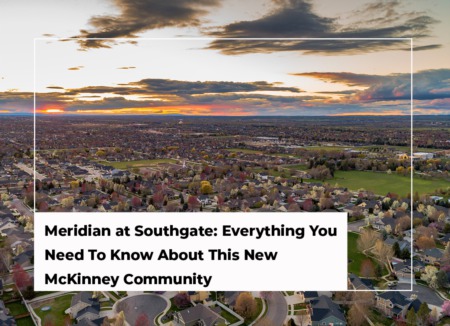 Meridian at Southgate: Everything You Need To Know About This New McKinney Community

Meridian at Southgate is the hot new community in McKinney, and people are excited about it! Whether you're shopping for the perfect new ...Read More 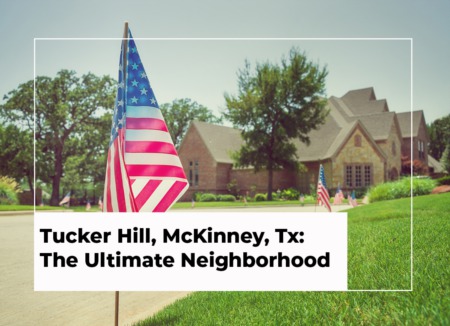 Looking for a place to call home? Consider Tucker Hill, McKinney, located 20 miles north of Downtown Dallas. The neighborhood is home to the seat of ...Read More 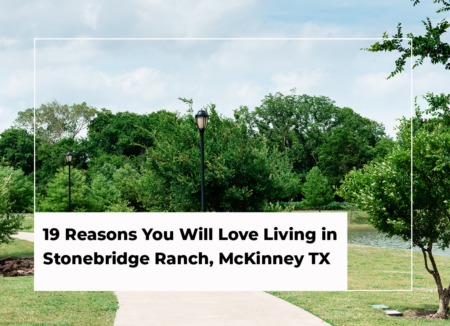 19 Reasons You Will Love Living in Stonebridge Ranch, McKinney TX

Everyone wants to live in an area they love. People enjoy living in a place that feels like home, but with hints of luxury and ease. For many ...Read More

All Categories Buying a Home (39) Selling Your Home (2)

Have a Question or Want a Free Market Report?

Contact Us
Questions? We're Here to Help
Recently From Our Blog

Meridian at Southgate: Everything You Need To Know About This New McKinney Community

Have a Question or Want a Free Market Report?